During the final room of the Event Horizon subchapter of Farewell, a "Kevin Room" can be found a little bit leftwards from the typical route one is expected to take when in feather form. Also known as the "Nightmare Fuel Room", this room contains an ARG (alternate reality game) that can be solved.

How to solve[edit | edit source] 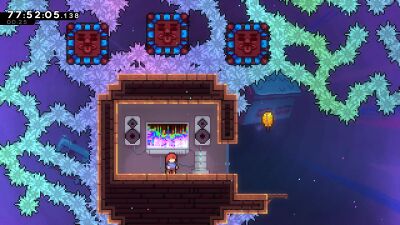 The "Kevin Room" is located leftwards of the upwards-heading portion of the feather section at the end of Event Horizon. Going left will lead to this room with two speakers, three Kevin blocks, and a computer playing back something relatively weird. Internally, this room is known as g-06. 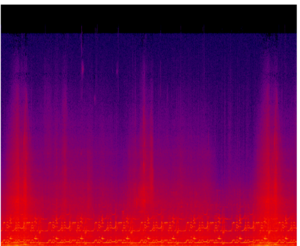 A spectrogram of the audio playing in the Kevin room.

The spectrogram features cursive text saying the words "not so empty" near the bottom, but that is about all that is to note. This refers to the "Empty Space" crystal heart found earlier in the level.

The spectrogram scrolling on the screen shown in-game is distinct from the audio's actual spectrogram. A purple heart is present within, but it is unknown what this alludes to. Expanding the image to 10 times its size and turning it into audio, via a program called "coagula", yields some really interesting results.

More hints as to how to solve the ARG can be found earlier in the chapter. When Madeline first catches the bird, prior to when Beyond the Heart starts playing, many of the audio glitches are in fact, when read in a spectrogram, a bunch of (nonsensical) letters. When stitched together, this becomes even more obvious. 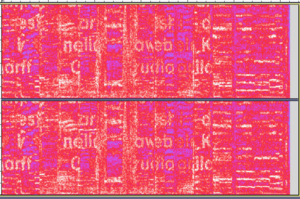 Spectrogram of the glitch noises that occur after catching the Bird for the first time.

The fake heart earlier in Remembered features glitch noises. The first time the heart is collected, nothing of note is drawn using the glitch noises; however, the second time onwards, spectrometer analysis reveals several different drawings, including Celeste Mountain, Granny laughing on an intro car, TASBot, the bird, and a Kevin block.

Stitching all glitch_add audio files together will result in a list of names of people involved in the Celeste community. This has been confirmed to be the end by Kevin from Power Up Audio (the person behind the Kevin blocks' sound effect).

The end of the puzzle.

Retrieved from "https://celeste.ink/w/index.php?title=Kevin_Room_ARG&oldid=1196"
Cookies help us deliver our services. By using our services, you agree to our use of cookies.