Forsaken City's A-Side features 20 red strawberries, a golden strawberry, and one winged golden strawberry. Additionally, one crystal heart and one cassette tape can be found. This page is a guide on how to obtain each and every strawberry.

To first find where the crystal heart will be, follow the instructions for Strawberry 9, which goes as follows: in the room with two zippers, one heading right straight into spikes, and the other heading upwards, use the first zipper normally, jump onto the second one, and boost up-leftwards to where an "up arrow" sign can be seen. From there, head left, and continue through another (relatively harder) room with two zippers. Once you're outside of the city, and can hear the "Piano Only" version of First Steps, jump and dash left until you find the satellite, collecting the strawberry on your way.

Dash following the order the colors flash, in the directions the colors are associated with. It is easiest to do this on the platform a little left of the computer screen. Therefore, dash up, left, down-right, up-right, left, and up-left. Once that's done (there is no time limit, you just need to dash in order), a blue crystal heart will appear. Collecting the crystal heart will yield you the Pointless machines achievement.

Right at the Chasm checkpoint, move the block out of the way, and head to the other side of it. Head upwards and you will discover another room, one with paths towards strawberries 16 and 17. A zipper on the ground can be used to boost upwards; use that to make it up.

You'll find another room, with a zipper stuck on the wall. Move the zipper out of the way, and head behind it. This will lead you to a cassette tape room. Cassette tape rooms feature alternating blue and pink blocks, which alternate to a beat synchronized with an 8-bit version of the level's music. Time your jumps and make it to the cassette. This unlocks Forsaken City B-Side. 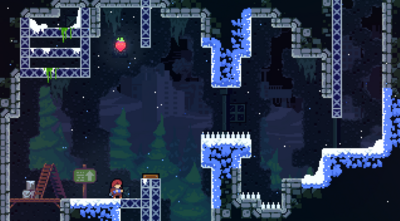 Your first strawberry is found on the second screen of the subchapter, requiring you to jump up using the spring and dash upwards to reach it. Land on the ground, and there you go! 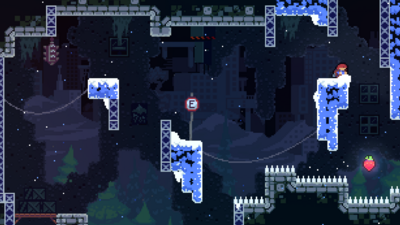 On the third screen; you need to jump off the block at the end of the room, collect the berry, quickly dash up to avoid falling into a spike pit, and grabbing up a wall. 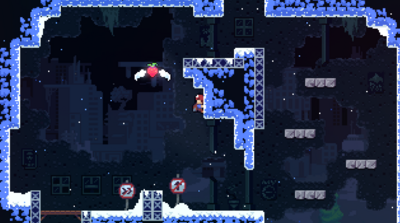 On the fourth screen; this is a flying strawberry. To collect it, you need to use the disappearing platforms at the right of the screen to jump upwards towards on top, and then jump off the left side to collect the berry. An alternative speedrun-specific strategy involves the use of Wallbounces. 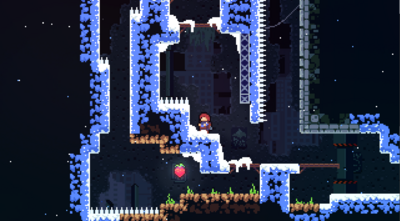 The room after the flying strawberry, on your left, when you find a glowing light, go left. Hidden behind a small challenge, collecting this berry involves scaling up a small ice wall with a few spikes here and there. Dashing rightwards after falling down, at the left, will net you the berry. 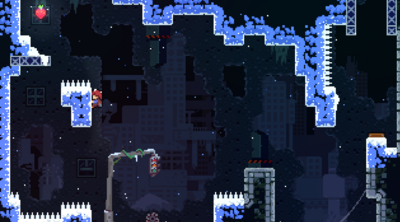 Boost off the zipper left-upwards, and climb onto the right side of the ice block with spikes on top. Jump off upwards, and dash left-upright in order to collect the strawberry. 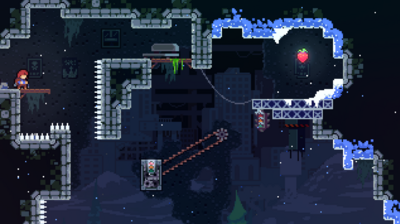 In the same room as strawberry 5, instead of heading upwards using the spring, which is how you would normally progress, head downwards, leaning on the right wall. An ice block can be seen: dash on it to destroy the block. In the room that follows, jump downwards, dash onto and hold the zipper, and jump onto it as it stops; subsequently jump to where the strawberry is. Jump off leftwards and dash up-left, through the floor, in order to get back to safety. 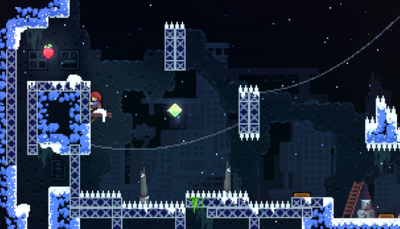 To reach this berry, instead of going to the right in the first room of crossing, go left into the room, and then dash into the green diamond and dash again, then climb up to the next screen. Jump over the first spring and jump on the second one, grab the wall and then jump above it, dash diagonally in the upper left corner into the refill and repeat the dash. It is worth to point out you can also find Theo right after the berry or when going left instead of up. 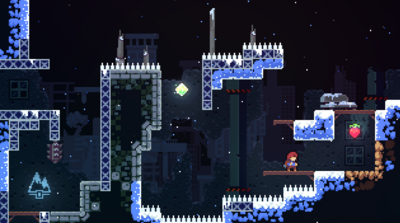 At the start of Crossing, go on the higher platform, jump and dash diagonally in the upper right corner, collecting the refill and again dashing to the right, then instead of going up dash into the first block under the exit of the screen, which makes an exit appear in a small hidden path with the berry. 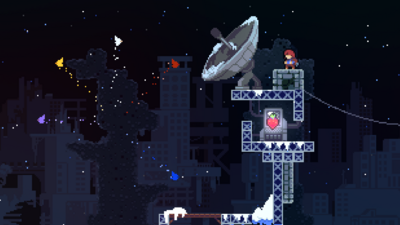 In the third room of Crossing, the one with two zippers (one heading right straight into spikes, and the other heading upwards), use the first zipper normally, jump onto the second one, and boost up-leftwards to where an "up arrow" sign can be seen. From there, head left, and continue through another (relatively harder) room with two zippers. Once you're outside of the city, and can hear the "Piano Only" version of First Steps, jump and dash left until you find the satellite, collecting the strawberry on your way. Don't forget to collect the while you're here! 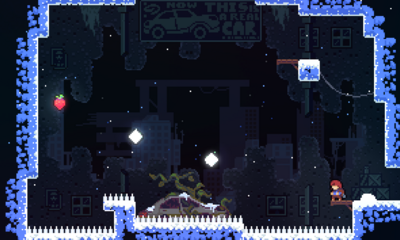 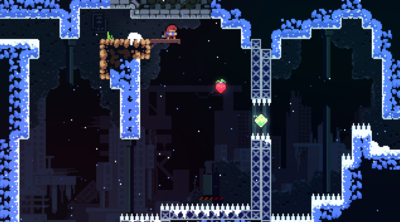 Reach the room mentioned above in Strawberry 10, but instead of heading back after getting the berry, climb up on a floating block and then dash into an odd looking tile on the ceiling, leading you to a secret room. After beating it you will enter another room, where you can find the berry and go back to the main trial. 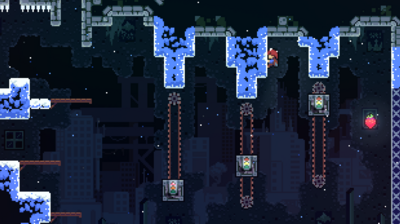 In the seventh room after the checkpoint, you can find a small hole in the ground, which you can dash into instead of dashing onto the crumbling blocks; in the room you just entered jump on the 3 zipper blocks, grab the berry and wait a bit on the wall for the traffic light blocks to come back to their original position and come back to the entrance. 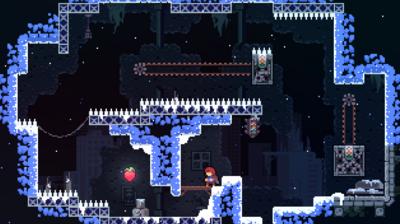 The strawberry is located again in room 7, but this time you have to instead of going to the right to leave the room go up and find another section with the berry, grab the zipper block and climb onto the wall, if you jump off the traffic light block you will immediately get launched into spikes, jump on the other, smaller zipper, when it goes the most left is can possibly go jump off of it, grab the wall and walljump off of it to get the berry. 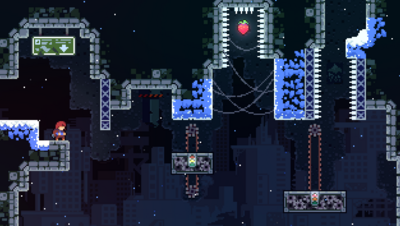 In the eighth room of the sub chapter, jump on the edge of the first zipper and use the boost from jumping off of it while its going up to jump between the spikes surrounding the berry and if necessary dash up to grab it. 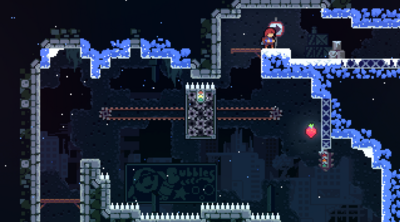 A winged golden strawberry is present in Forsaken City's A-Side. Retrieving this strawberry requires not dashing during the entire chapter. A large variety of tech is required for beating this gauntlet; this includes large jumps (such as 6 jumps), spike jumps, neutral jumps and many more.

Retrieved from "https://celeste.ink/w/index.php?title=Forsaken_City/Collectibles&oldid=2098"
Categories:
Cookies help us deliver our services. By using our services, you agree to our use of cookies.