From Celeste Wiki
Jump to navigation Jump to search 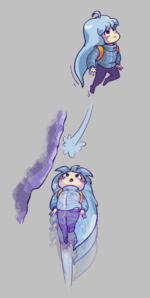 A wallbounce as depicted in the Celeste manual.

A wallbounce, sometimes abbreviated to wounce or known as Super Walljumps in the game files, is a mechanic that's introduced in Summit B-Side, and used through the C-Sides (3C through 7C) and Farewell. It's a special type of walljump that's done by dashing upwards next to a wall, and jumping away from it while Madeline still has the dash momentum. It allows the player to reach greater heights and to jump over tall obstacles.

Introduced in Golden Ridge C-Side, a wallbounce performed after leaving a bubble. Since the bubble gives the player dash momentum, they can pull off the trick without needing to dash again.

Retrieved from "https://celeste.ink/w/index.php?title=Wallbounces&oldid=3396"
Cookies help us deliver our services. By using our services, you agree to our use of cookies.