From Celeste Wiki
(Redirected from Celeste Wiki:Trans)
Jump to navigation Jump to search
Rule 0. Transphobia, in any shape or form, is forbidden and will result in getting instantly banned.

And my gender identity still isn’t all “figured out” by any means. The Celeste community has wanted clarification on Madeline’s identity for a long time now, and I don’t blame anyone for wanting that, but the messy realities of my gender identity and coming out have meant that I needed time before I could talk openly about it.

So, okay, let’s get into the weeds on this.

This wasn’t our intention. Thinking about it though, it begs the question: Why couldn’t a cis person relate to a trans person? Modern trans struggle might be unique in its details, but it is definitely not alien to the human condition. We are people.

When I wrote Celeste I sincerely still believed that I was cisgender, but I was nevertheless waist-deep in gender feelings (among other anxieties). When Madeline looks in the mirror and sees her other self; when she attempts to abandon her reflection, who then drags her down the mountain; when the two reconcile and merge to become stronger and more complete… that was all unknowingly written from a trans perspective. So maybe if you’re a cis person and you personally relate to Madeline, you shouldn’t feel like we pulled one over on you. Instead, you could take this as evidence that trans and cis feelings aren’t so different, that the chasm between transness and cisness isn’t such a wide gulf, and that most of the ways that trans existence is alien to you are the result of unjust social othering and oppression.

If you got something out of Celeste, and now you’re thinking that Madeline being trans ruins that for you, I would take that as a sign that you have some transphobic beliefs to work through.

Here’s something that definitely isn’t true: The reason trans representation is important is because human beings can only relate to characters who are identical to themselves, and any gains in trans representation come with an equal loss for cis folks. That’s ridiculous, and actually the opposite is true. People need to see and feel the experience of those different from themselves, especially from less-privileged groups who they share society with but wield outsize and often invisible power over. Trans folks, and other marginalized groups, have a lot to teach that will help everyone. If you’re cis and Celeste helped you, that’s awesome! That simply means that you learned something about yourself from a trans story.

Better representation benefits everyone. Well, unless you’re profiting off of the suffering of trans people, in which case fuck you. 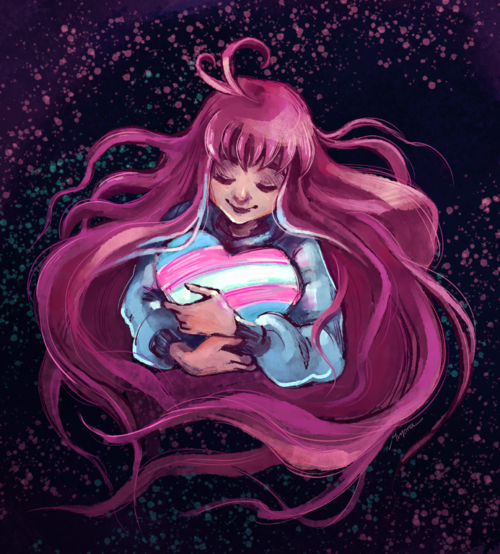 So… why isn’t her transness explicitly confirmed in the text of the game?[edit | edit source]

There is, as they say, a lot to unpack here. I don’t know that I have a satisfactory reply to this question that will tie it all up with a bow. The best that I can do is be transparent, and help you understand where we were coming from. I don’t believe that this is a simple question, and there isn’t a straightforward answer.

We understand that some fans felt hurt by our silence on this after Farewell’s release, and I’m sorry for that. It’s wrapped up in my personal gender identity and it’s messy! I simply didn’t know the words until now.

I mentioned earlier that I didn’t know that Madeline was trans during the development of Celeste, and that I had a hunch when we made Farewell. That was a gradual thing. As time went on post-launch, my personal understanding of Madeline shifted from “maybe she’s trans” to “okay she’s definitely trans”.

We discussed this when writing Farewell, and our conclusion was that we wanted to afford Madeline privacy. That yes, maybe she was trans, but that it really wasn’t any of ours or the player’s business. She is a woman, a human being, and that’s all we need to know until she decides that she wants to tell us more. She didn’t strike us as a person who would publicly identify as trans, certainly not before the events of the main game. We felt that hints, like those in the Farewell ending sequence and on Theo’s InstaPix account, would be more appropriate for her character. I feel conflicted even now while writing this, effectively outing her, because it doesn’t feel entirely fair to her. It’s the same consideration that I would want to be shown to me.

But, of course, Madeline is a fictional character and we are her authors. People have rightly pointed out that there are questions we should consider about what harm we might be doing by “hiding” her identity. But we also considered what harm we would be doing by signaling to players that they are entitled to know whether she is trans, and that it is a vitally important detail worth agonizing over. Trans people shouldn’t be forced to publicly identify as trans in a world that is often hostile to them, and they shouldn’t be reduced to their transness. They should be allowed to live their lives how they want, and everyone should be free to explore their gender identity without feeling pressure to place themselves into simplistic categories for the benefit of others.

We definitely didn’t want it to be a big climactic thing. We didn’t want it to be like Samus removing her helmet at the end of Metroid to reveal that — surprise! — you were a trans woman all along. That kind of thing just feels like a cheap gimmick in this context. It doesn’t feel like it pays enough respect to Madeline, her story, or real life trans folks and the scrutiny they endure.

We also didn’t want to pull a JK Rowling and start inserting details post hoc that might feel insincere or forced. Like sure, whatever you say lady, Dumbledore is gay… it’s convenient that this was never mentioned in the books or carried any weight in the plot. In Celeste, I would argue that Madeline’s transness is meaningfully intertwined with her story, but the base game was subtle about Madeline’s identity and feelings (in part because I wasn’t fully conscious of them), and their metaphorical connection to the gameplay. We preferred continuing that mode of communication over saying “yep, she’s a trans.”

From where we were standing, it felt like the right decision was a light touch, a nod to everyone who had picked up on it that could allow them to discuss the ways that they identified with Madeline more openly, without making a spectacle of outing her. Amora worked with Lena and a few trans friends on the small details that we placed in Madeline’s room for the Farewell ending scene. People noticed right away, to our delight.

To be clear, we don’t believe that explicit trans representation in media is harmful as a blanket judgement. Remember: We were coming from a position of the base game already existing, where I didn’t consciously write Madeline as trans but I was beginning to slowly realize that she and her story were, nonetheless, trans. Navigating how to address that in Farewell is a very different task to planning from scratch how a character’s identity will be introduced and portrayed.

We hoped that the general take-away from Farewell’s breadcrumb trail could be that trans people can exist, and their perspectives are valuable. They can interact with and be relatable to cis people and it doesn’t have to be a big deal. We don’t need to know upfront or at all whether everyone is trans or cis. And we hoped that our trans and questioning fans could relate to and discuss Madeline’s story on their own terms more easily, and feel vindicated.

Of course, we underestimated how much anything less than a full, in-writing confirmation will be endlessly debated as “not enough proof,” to which I ask, where’s the proof that she’s cis?

If I could start over from the beginning of Celeste’s development, knowing everything about myself and Madeline that I know now, would I write her differently? Yeah, probably. I didn’t go into this game intending to make a trans story and I would understand my own gender a lot better than I did, that’s for sure. But then again, I’m a very different person and Celeste wouldn’t be the same game. For my part, Celeste is about who I was, which includes that struggle for understanding.

Heck, if we’re time travelling now, I think that most trans people would understand if I have bigger fish to fry as far as getting a redo on major life events with a better understanding of my gender.

Celeste is a game written and designed by a closeted trans person who was struggling with their gender identity, scored by a trans woman, with art and code and sound and other labor from their inspiring and irreplaceable friends. These are the perspectives that we approached this from, and I think that the game reflects that beautifully. I would never claim that anything I have ever done is perfect. I do think that we captured and preserved a few pieces of ourselves and a moment in time pretty nicely, and Madeline’s transness is one part of that.

Thank you so much for playing Celeste, and for caring about Madeline’s story.

Retrieved from "https://celeste.ink/w/index.php?title=Celeste_Wiki:Trans&oldid=2062"
Cookies help us deliver our services. By using our services, you agree to our use of cookies.